Access to metals and minerals is a prerequisite for modern society. In fact, during your lifetime you will need 800 metric tons of minerals and metals.

Almost everything you see around you in your home has a direct connection to our bedrock – toothpaste, jewelry, appliances, batteries, windows, cell phone, computer and speaker. And when you step outside the door, the products from the bedrock are still everywhere – buses, cars, trains, bridges, lampposts, sculptures, signs and much more. Without metals and minerals, our modern lives would simply not be possible.

They are also absolutely necessary to take the step into the future. Wind turbines, batteries and other climate-efficient solutions required for the green transition also need metals and minerals that we have not mined before. Several of them are found in the Swedish bedrock.

In Sweden, we have a far more than thousand-year-old tradition of understanding and utilizing the bedrock’s raw materials. They are the start of long growing value chains and thus form a backbone of the Swedish economy.

If You Can’t Grow It, You Have To Mine It

Metals are elements and therefore recyclable infinite number of times. They thus fit perfectly into the circular economy and also play a crucial role for the sustainable society. Metals mined in the mines are supplemented with recycled raw material. It is good for both the environment and the economy to combine primary and recycled raw materials in the process. Recycling alone does not cover the needs of today and the future. A growing population and new technological solutions for the climate require more metals and minerals in the circular flow.

In Sweden, we mine 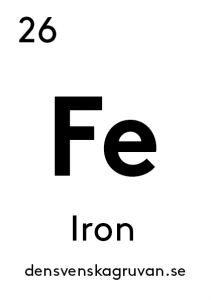 Iron is the main ingredient in steel, which is a real community builder. We use it almost everywhere; in bridges, walls, floors, roofs, trains, cars and not least in machines and tools that in turn make other products. Steel is the most widely used metallic raw material in the world. Steel is used more than 20 times as much as all other metals combined. Sweden today accounts for about 90 percent of all iron ore produced in Europe and iron ore is mined in five Swedish mines. 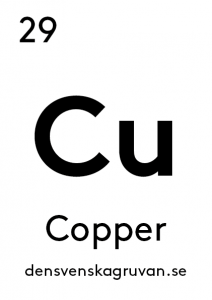 Copper is used to conduct heat and electricity and connects our world in many ways. Copper is also bactericidal and can be used in, for example, door handles. You can find copper in electronics that are in your computer, mobile phone and TV. Copper is the world’s third most widely used metal after iron and aluminum. In Sweden, copper is mined in seven mines and we account for about 10 percent of production in Europe. 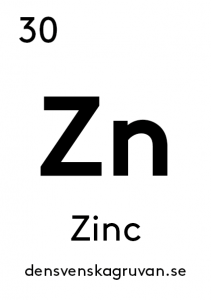 Zinc is used in, among other things, surface treatments by galvanizing and hot-dip galvanizing to prevent corrosion. It is also used in batteries where the most common use is as a negative pole in alkaline batteries. Zinc is also found in a variety of medical and cosmetic products. Zinc is mined in seven Swedish mines and Sweden accounts for about 36 percent of Europe’s production. 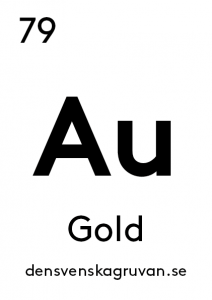 Gold works well as a conductor of electricity and is therefore used in telephones, computers, hi-fi products and other electrical appliances. In addition to its presence as a component in the electronics, space, and pharmaceutical industries, the jewelry industry is still the largest user of this precious metal. Gold is currently mined in seven Swedish mines and Sweden accounts for about 23 percent of Europe’s gold production. 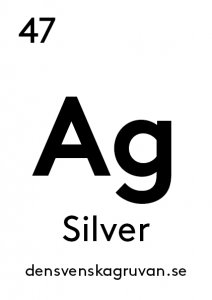 Silver conducts heat and electricity best of all metals and is used in batteries, connectors and circuit boards in electronics such as mobile phones and computers. It is also used in solar cells, aircraft and satellites as well as in healthcare because it is antibacterial. Silver is mined in three Swedish mines and Sweden accounts for about 20 percent of Europe’s production. 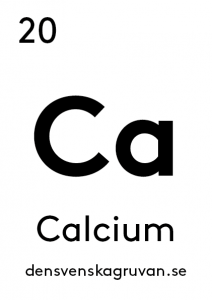 Calcium belongs to the alkaline earth metals. The common name for chemical compounds that contain calcium is lime. Limestone is an industrial mineral and limestone-based products have a very wide range of uses. In the manufacture of building materials, roads, buildings, stabilization products and in asphalt. Limestone flour is used in gypsum, mortar, concrete and tiles. Lime is also used in agriculture and horticulture for, for example, pH regulation of soils, which results in better crops and in animal feed, as well as for purifying wastewater and drinking water. Limestone accounted for approximately 78% of the total value of mined industrial minerals in Sweden in 2019. Approximately 6.3 million tonnes were delivered during the year. 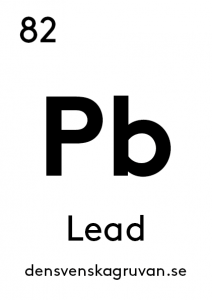 Lead is important in healthcare where it is used in protective equipment, as it protects against ionizing radiation used in X-rays. The metal is also an important part of larger batteries such as car batteries and at reserve power plants. Because lead provides good and long-lasting moisture protection, it is used in cables and wires, especially underground or in water. Lead is mined in five Swedish mines and Sweden accounts for approximately 38 percent of production in Europe. 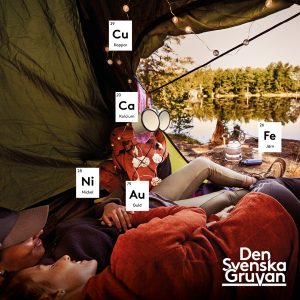 During our lifetime, each of us needs